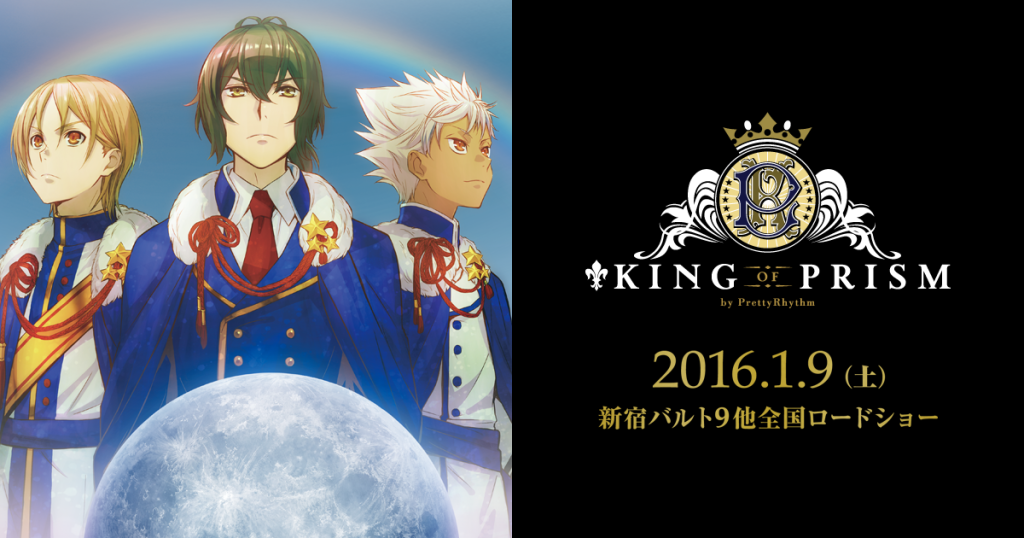 Have you ever heard the term “応援上映 (Cheering Screening)”, or an animation movie called “King Of Prism”?

It became a kind of cultural phenomenon in Japan. Even after 6 months from the first screening, many people still go to see the movie. Some people even say they repeated the movie more than 100 times!
Kinpri is so addictive.
To be honest, when I first saw the preview of Kinpri, I did not think it became so successful but just thought “Nah, another silly idol boys anime coming……”

However, since all the people around me who saw the show said “キンプリはいいぞ (Just watch King of Prism),” I decided to see it as an experience, and what happened was……. I repeated the film on the same day.

Yes, I bought the ticket for the same film right after the end of the screening and watched KinPri twice on the same day!

I had to admit I had made little of it before. It was amazing. I fell in love with it immediately.
So far, I ended up watching it 7 times, and still have some schedule to go to watch it.

Why it became so popular and addictive? And why you should go to watch it?

Here is the reasons.

What is King of Prism? 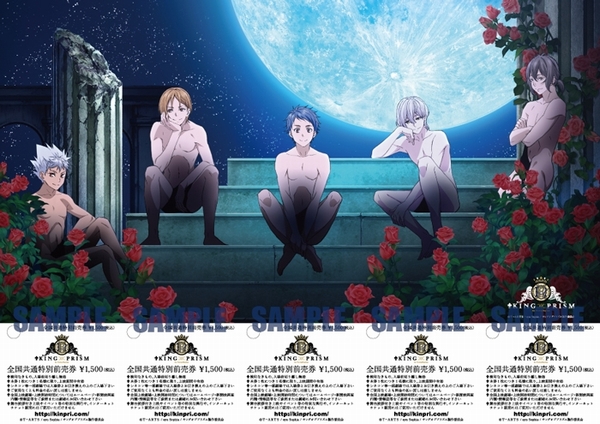 The design of the pre-sale ticket. It already shows how crazy this movie is……(in a good sense)
5枚綴りグループ前売鑑賞券「正装ver.」 ⒸＴ－ＡＲＴＳ / syn Sophia / キングオブプリズム製作委員会

King of Prism is an animation movie made and released in Japan in 2016.

It is a spin-off movie of anime series “Pretty Rhythm Rainbow Live.”
Pretty Rhythm is an anime about idol girls targeting young female children (which means, like other anime Pretty Cure, obtained huge male fandom and small female fans), however, King of Prism features the male sub characters of the show and targeting female audiences.

One thing to note, you don’t need to watch and know the original Pretty Rhythm series to enjoy King of Prism. There are many flashback scenes in the movie which explain the back story to the new audience, and after all, it is not the storyline itself but the style of the screening you should check for King of Prism.

Why it is Special? Why it became so popular?

What made King of Prism so popular and addictive is its unique screening style named “応援上映 (Cheering Screening, or you can say Live Cinema Screening)”.

During KinPri screening, you are encouraged to wear cosplay, chant, call back lines, react to the character’s phrases, wave glow sticks of their favorite character’s theme colors, and just do whatever they like!

It is totally different from the usual screening where the audience are supposed to sit down still and just eat popcorns.

Seeing is believing.
Please watch the official PV of the show to see how it is like.

Some westerners might say it is similar to the show “The Rocky Horror Picture Show” which is famous for its passionate fan base.

BUT! It is not only the style of screening which made KinPri so attractive.

The direction of the show is so CRAZY!!!!

People who first see KinPri often say “What the heck is going on!?”
I could not stop laughing for the entire show on my first day of KinPri.
It is like taking some strong drug!!! 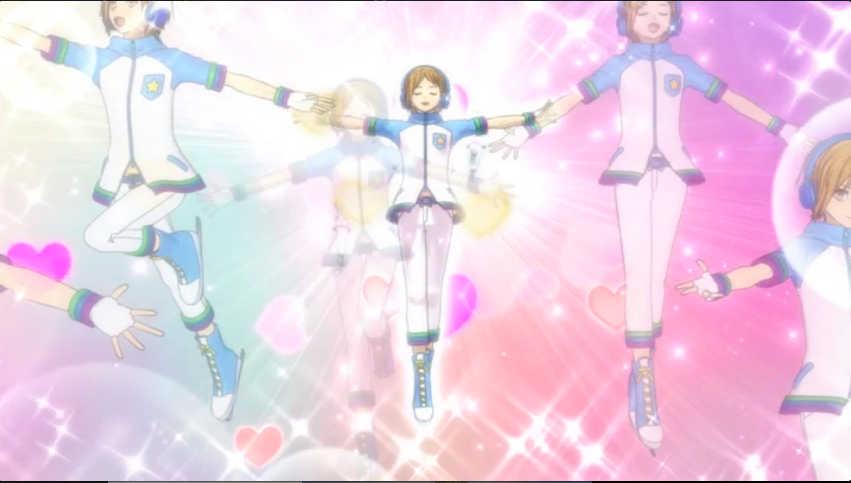 Characters suddenly begin spinning, dancing, and then dragon appears and BOMB! the explosion, and blow thousands kisses to the audience, fly into the sky with bicycles……

There is no way to explain this movie.
After watching the show, many people can only say “世界が輝いて見える……(The world is so shining……)” (because it’s King of “Prism”) 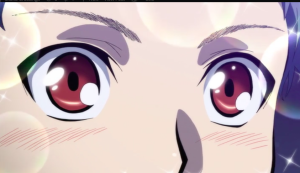 I totally recommend to watch this movie to those who have chance to visit Japan this summer.

King of Prism is expensive than usual movie considering its relatively short screen duration (1600yen, 60 minutes), however, it is worth it and you can enjoy the show with local Japanese Otakus. And it is definitely something you can only experience in Japan!

FYI, these are the reaction of the friends of mine who visited Japan and saw King of Prism. 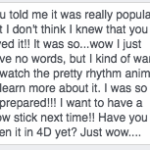 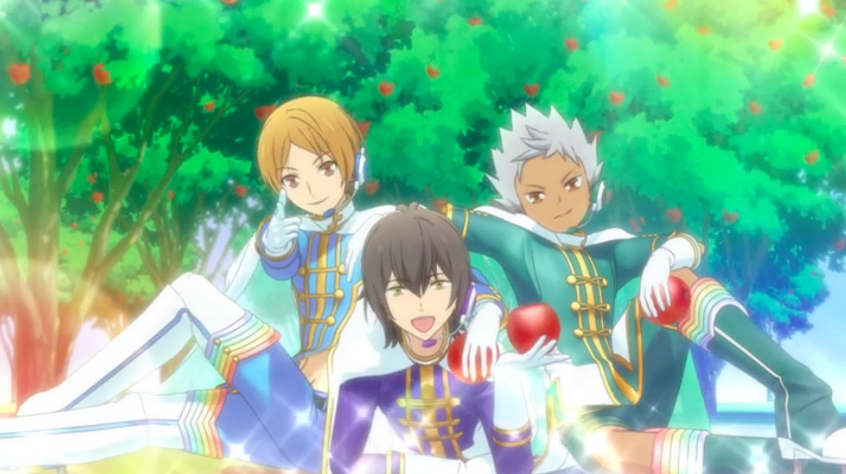 You only need to go to the theater which is screening “King of Prism.”
Please note that there are two types of screening,

Please be sure to choose 応援上映(おうえん上映/ Live Cinema screening).

Also, please book the night time screening, so that you can enjoy other audience’s reaction. (During day time, there are fewer audiences and it is not as enjoyable as night time surrounded by devoting fans.)

Since it has been half a year since its first release, there are fewer theaters left which still screen King of Prism now, but 4DX versions of King of Prism was released at the end of June, and it is crazier with special effects, so please check it!
(4DX version is 2400 yen. As of July 4th, it is so popular that you need to book it online 3 days before.)

Here is the list of the theaters screening KinPri.

These are the stuff which can make your Prism experience more fascinating! (No need if you don’t have ones.)
①Glow sticks, especially the ones which you can change colors.

You can buy one on Amazon, or animate in Japan.

Here is the list of the color of the characters. The audience usually change colors of the glow stick based on who is on the screen and who is their favorite characters. 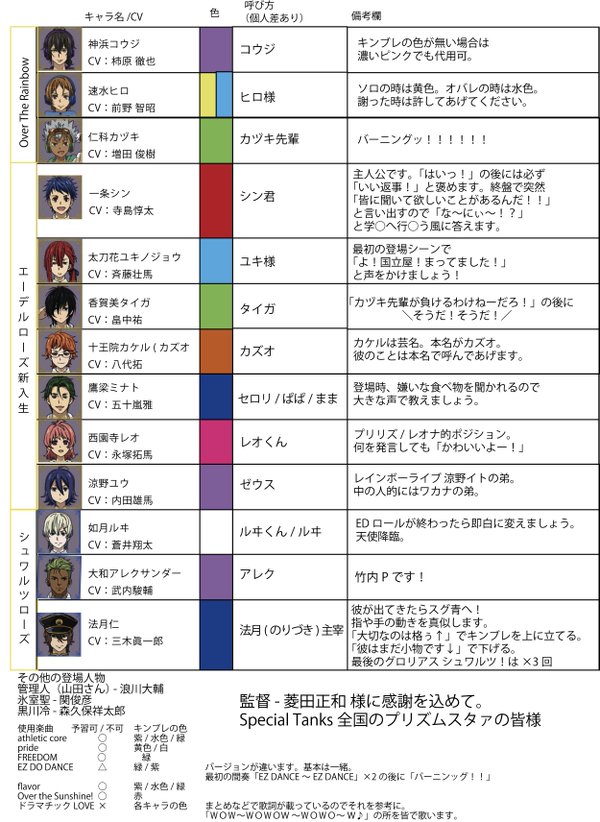 ②Cosplay
For second time visitors. Wear the costumes of your favorite characters! 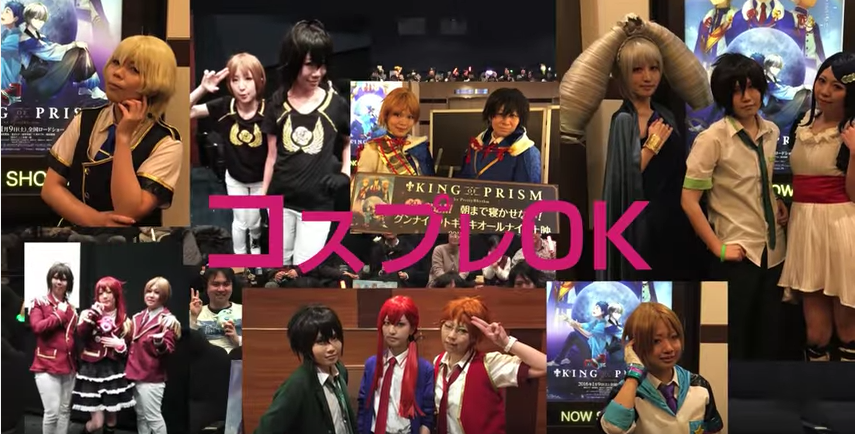 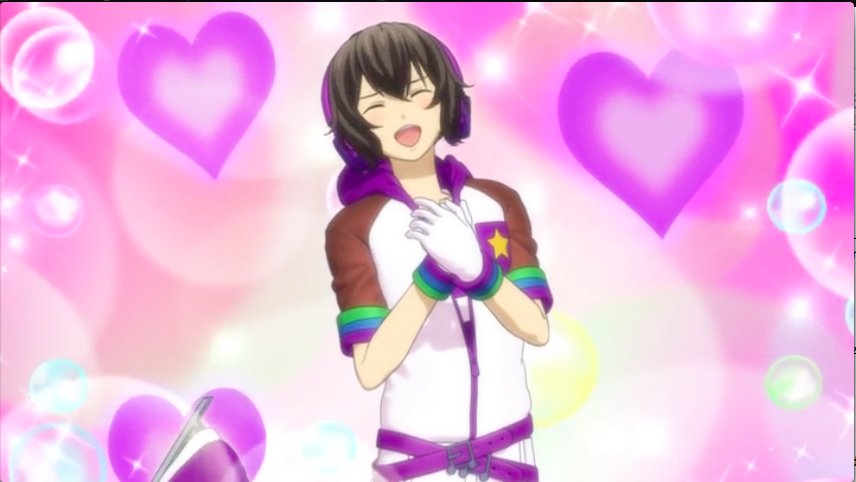 All the audiences come to enjoy and participate.

Although I recommend you to see other audiences’ reactions, they don’t chant/ scream as performers.
Please try to join the excitement.
Please try to enjoy it together with others instead of just sitting and see their reactions.

Also, if you are going to 4DX, please wear the clothes which can be wet. There are splash, tons of bubbles, and strong winds waiting for you!

I hope your KinPri experience makes your life full of sparkle of prism!

-The merchandises of King of Prism is also super crazy. I LOVE IT! 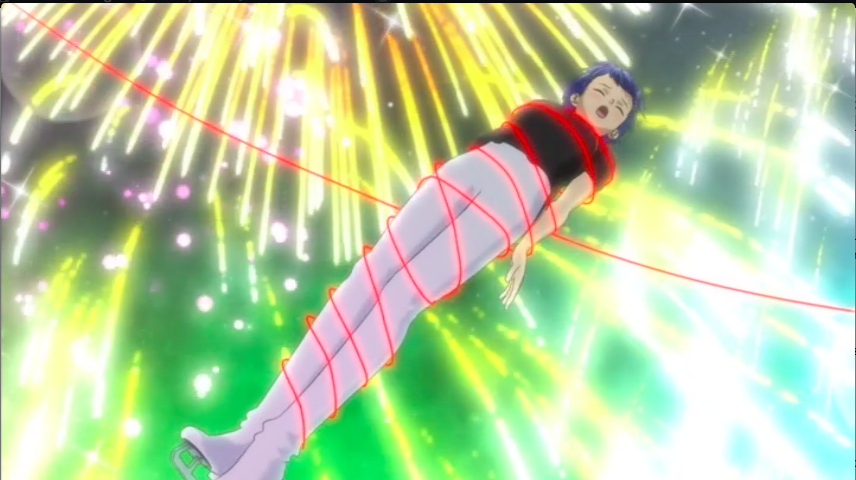 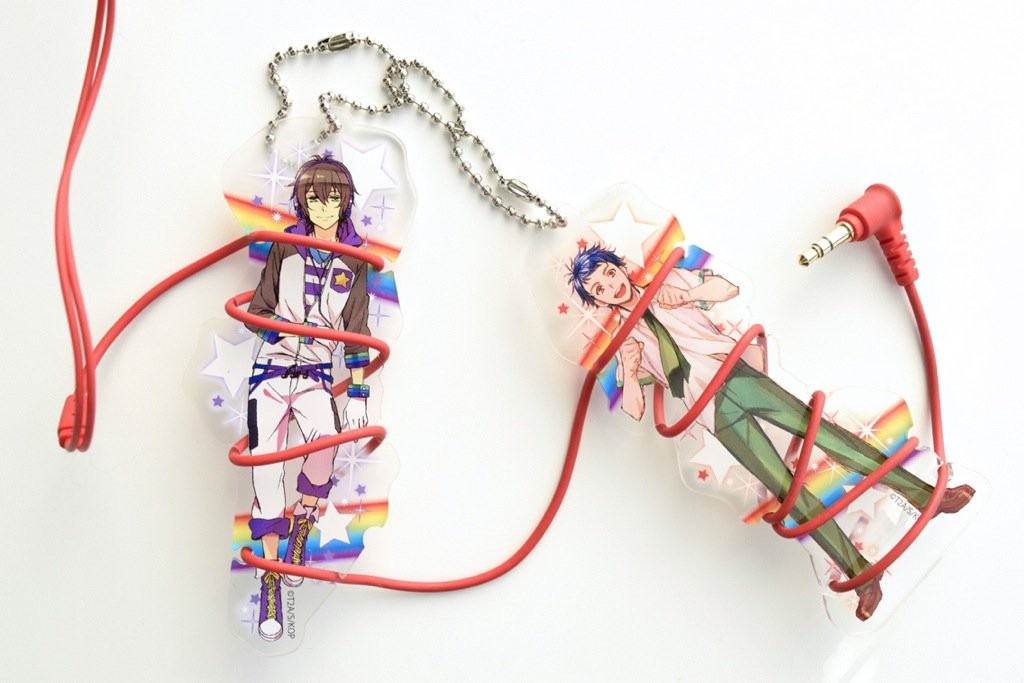 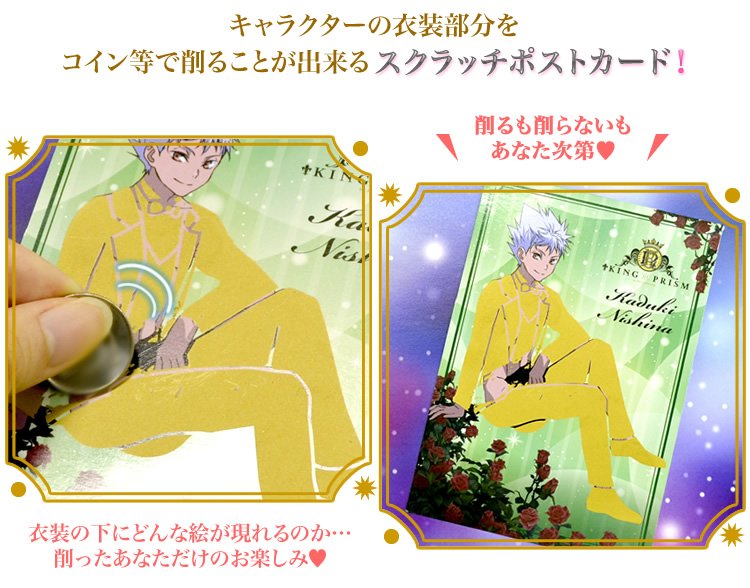 scratch card……when you scratch the gold dress of the characters……!? 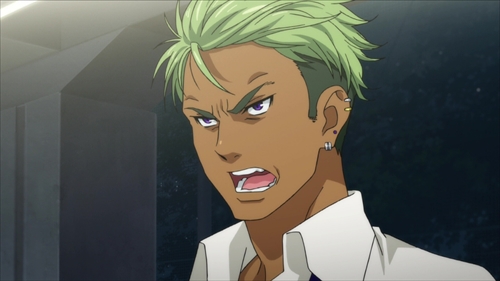 Please cheer him with a purple glow stick when he does dance battle with other characters!

I went to a Doujinshi Convention called "Comic City 136" held in Tokyo on June 28th, 2015. I will write down some points...
日本人以上にシャイ!?ポルトガルのアニメイベントIberAnime参加記
【World Cosplay Summit】世界コスプレサミットレポート（男性・男装レイヤー中心）
Loading Facebook Comments ...